For our regular Friday night takeout night a couple weeks ago we tried Present, a Vietnamese place out our way. Our hope was that it would be like Four Sisters, but without the hike out west. And, for the most part, it did not disappoint.

My first issue with Present was that it is impossible to order a side of vegetables. You can order a vegetarian entree, but it seemed a little excessive to spend $13 extra to round out the meal. And since it was Friday and the fridge was fairly depleted of produce by then, we ended up supplementing our takeout with a frozen veg medley. I would have much preferred some steamed baby corn and broccoli! My second issue was that it was SO HARD to select just a few things from a menu where everything sounds absurdly delicious. This, however, is the kind of problem I like to have!

The star of the meal was hands down the baby clam salad. I would say this rivals Four Sisters, with maybe a higher peanut-to-clam ratio. The rice was also perfection--a teensy bit al dente and way more flavorful than I can ever make plan old rice. We also ordered crispy roasted duck with tamarind sauce and caramelized clay pot fish. Both proteins were slightly overcooked and the sauces a bit on the sweet side, but on the whole still pretty good.

Overall, solid takeout, and it's probably better dine-in while the food is freshest. We'll undoubtedly be back--we still have to try the seafood pancakes, the black pepper shrimp, and everything else on the menu. Friday, come soon! (portions x-posted to yelp.com)
at 12:09 PM No comments:

So, obviously we received an even more exciting bounty than what's in title of this post, but these were the main things I tried in recipes this week.

First up was the dill and radishes--we made catfish with dill sauce and butter-braised radishes. Now, I am not a huge fan of dill...about the only thing I really appreciate it in is chicken noodle soup. But this dill sauce is SO FREAKING good. Not only did I practically lick my plate after dinner, I used the sauce as a dressing on a salad the next day. Yumyumyumyumyum. It was also a good way to use some of the scallions in this week's CSA share and leftover parsley from last week. I wonder if it would be better on a more flavorful protein...the pungency of the sauce really overpowered the catfish. Also a super-easy dish overall. I paired this with butter-braised radishes, which really didn't go at all, but I was looking for a use for radishes that didn't involve just slicing them up and putting them in a salad. The radishes were fine..kind of like parsnips but not as sweet. I used about half the butter, which really should be no surprise to you. 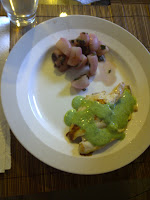 The next night we had cold beef noodle salad, which was decent but not a showstopper. I used top sirloin, and used the grill for the first time by myself (yes, I'm a girl). The steak itself was really tasty. Used half udon, half tofu shirataki to cut back on calories (make sure you nuke and drain this first because it's kind of stinky if you don't); snow peas, radishes, and carrots from the share instead of the veggies they recommend, and no mint. I will say I appreciated the volume you get from the calories! Speaking of calories, I think I drizzled a bit of sunflower oil on this, but that's all. I don't understand why people put oil on their salads. I think next time I would replace completely with the fake noodles, because you honestly couldn't really tell the difference. Good, all-the-major-food-groups cold dish for a hot summer night.

Our last real dinner use of the share was salmon with wilted watercress and balsamic drizzle, which took, like 7 minutes total to make (assuming you washed the watercress ahead of time. If not...8.5). Good, unexciting, but simply delicious. Paired with frozen take-and-bake wheat dinner rolls with olive oil for dipping.

Last night I took inspiration from F&W's grilled kale with garlic, chiles, and bacon to make a side for chicken burgers (yes! I used the grill all by my lonesome AGAIN!). Tossed the kale with the garlic and crushed red pepper (not a lot, in place of the small red chile), grilled using the perforated grill pan method. Omitted the bacon step, and tossed with myer lemon-flavored olive oil since we had no lemons in the house. Seasoned at the end with some kosher salt as well. P, who is an avowed non-kale-lover, said he would eat this every day. So I consider that a win! Sadly, the dinner as a whole did not go as planned. Due to my complete lack of coordination, said chicken burger and a third of the kale ended up on the floor with a million shards of ceramic. So I had more kale, and a couple glasses of wine, for dinner.
at 3:41 PM No comments:

Other stuff on this blog